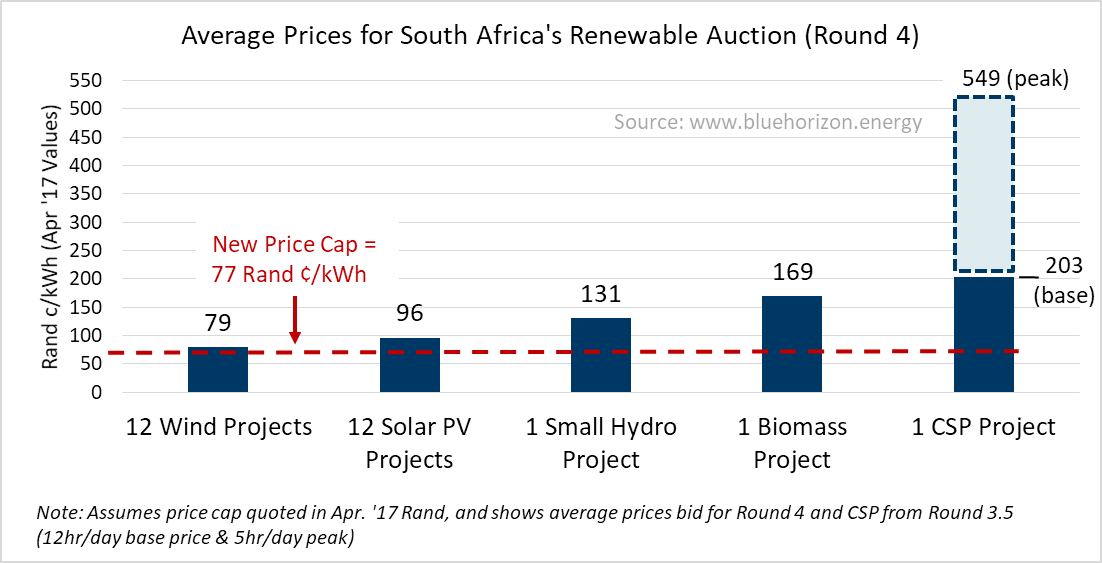 While the South African government’s new deadline for the 2.3 GW of delayed renewable energy PPAs raised hopes for some, the conditions placed on the projects raises concerns for IPPs and damages the credibility of future government procurement.

The 27 utility-scale renewable energy projects consisting mainly of solar PV & wind projects have been waiting for over two years on the national utility to sign the PPAs after being selected through a competitive auction process. As the sole off-taker of electricity from these projects, Eskom has been the main source of these delays. The parastatal’s disincentive to buy electricity from IPPs is rooted in its monopolistic structure, competing procurement interests, and the recent decrease in electricity demand from customers.

The new price cap hurts some IPPs more than others

In addition to setting a new timeline for Eskom to cooperate, the government is going back on the rules it created for itself by opening-up the prices for renegotiation with a new price cap of 77 Rand ¢/kWh (~5.9US¢/kWh assuming ‘17 currency). The price cap is lower than what many projects bid at a couple years ago, and may be an unbankable level for some. In particular, the CSP (100MW), small hydro (5MW), and biomass (25MW) projects included in this determination will have the most difficulty if held to the same price cap. The price cap also doesn’t account for the other benefits the projects from the initial bids, such as local content, job creation, and socio-economic development in local communities. These enterprise development commitments are at risk of now being cut by IPPs if they are forced to squeeze project costs.

The drop in technology costs for some solar PV and wind project components during the program’s delay is a major driving factor for the price renegotiation. Since most of these projects are now likely to come online by 2021 rather than the end of 2017 as originally scheduled, IPPs will also project ahead their costs for major components like solar PV modules and wind turbines, both of which will likely continue to decrease. The drop in levelized costs for wind in recent years, however, is mainly a result of larger turbine sizes (both rotor diameter and hub heights), which create additional challenges for wind IPPs to take advantage of these improvements with existing EIA terms and engineering plans for smaller sized turbines. Therefore EIA amendments, size amendments, and project re-engineering may be necessary for some projects to comply with the new price cap.

A fair renegotiation should also take holistic account of other project costs that may have changed during the delay such as wages, EPC, local content premiums, and procurement delays while weighing this against other project benefits like job creation and enterprise development. Even if the price renegotiation is legally possible and IPPs cooperate, it will be complicated and challenging to get it right by the end of next month. The long term effects will be damaging

South Africa’s transparent and credible auction design initially made it a poster child for renewable auctions and helped it dramatically reduce prices from Rounds 1 to 4 by attracting global competition. There have been no updates on the expedited Round 4.75 of ~1.8 GW or the 10 additional small-scale projects already selected (2 biomass, 2 wind, & 6 solar PV of ~5MW each), suggesting there won’t be progress here until after the new IRP is updated along with other IPP procurement for coal, nuclear, and gas projects. Several solar PV manufacturers have also closed South African manufacturing facilities during this delay including an inverter assembly plant by AEG and a c-Si solar PV assembly plant by SunPower. These recent price renegotiations, hiring/firing of multiple Energy Ministers, and multi-year delays damage government credibility and ultimately increase risks for future investment in South Africa.

While institutional challenges have hurt the industry locally, changes in technology costs for renewables and the rise in energy efficiency have also played a role in disrupting the electricity sector in South Africa and elsewhere. This trend will likely continue in the coming years, so while delays in procurement are challenging, it does give more time for renewable technologies to achieve further cost reductions and demonstrate benefits in the regional market.

*Photo Note: Assumes price cap quoted in Apr. ’17 Rand, and shows average prices bid for Round 4 and CSP from Round 3.5 with a 12hr/day base price & 5hr/day peak for CSP only